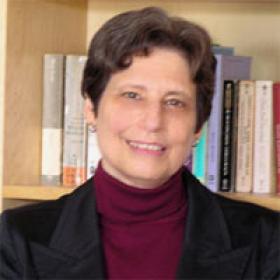 Contact Information
Office : Building 2S Room 229
Phone : 718.982.3682
Fax : 718.982.3643
Contact Via Email
Department Faculty Profile
Ellen Goldner writes and teaches about nineteenth- and twentieth-century American narrative and American popular culture, often with an emphasis on gender studies and “race” studies.  She has taught nineteenth- and twentieth-century and women’s literature courses for the English Department at both the undergraduate and graduate levels.  She also has taught in the Women’s Studies and American Studies Programs at CSI and in the Women’s Studies Certificate Program at the Graduate Center.  She has organized student trips, including a walking tour of lower Manhattan and trips to New York City museums.  Dr. Goldner currently coordinates the Bertha Harris Women’s Center at CSI, planning performances by women musicians and artists, panels like Careers in Women’s Advocacy, and events like Take Back the Night.

Professor Goldner has published a co-edited volume, Racing and (E)Racing Language: Living with the Color of Our Words, with Syracuse University Press and numerous articles on American literature in scholarly journals on texts by authors ranging from Harriet Beecher Stowe to Toni Morrison and Herman Melville to Charles Chesnutt.  She has also written on twentieth-century film adaptation of nineteenth-century fiction in the context of late twentieth-century American history.  She is currently writing a book about flows of people, print, and visual culture in the U.S. Abolitionist Movement and their implications for understanding the contest over slavery.