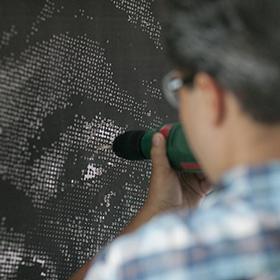 Miguel A. Aragón was born and raised in Ciudad Juárez, México; prior to his appointment at the College of Staten Island, Professor Aragón taught Printmaking, Foundations and Design courses at the Universidad Autónoma de Cd. Juárez in México for several years and in 2011 he was a Visiting Professor at Northern Illinois University.

His artwork explores subjects of violence, transient and/or persistent memory, perception and the multiple; he uses erasure as language through the use of processes that are reductive in nature. Aragon’s work is included in various national and international private and public collections such as the Museum of Fine Arts Boston, National Museum of Mexican Art in Chicago IL, Minneapolis Institute of Art, and Museu do Douro in Portugal, among many others.

MFA The University of Texas at Austin

BFA The University of Texas at El Paso

Miguel A. Aragón has exhibited extensively nationally and internationally through Solo and Group Exhibitions in places like the International Print Center of New York (IPCNY), the Frances Young Tang Teaching Museum and Art Gallery in Saratoga Springs NY, and Luis Leu Gallery in Karlsruhe GERMANY to name a few; he has received invitations to participate in Artist Residencies in the USA and Germany, such as Kala Art Institute in Berkeley CA, Zygote Press in Cleveland OH, and Historish-Technisches Museum Peenemünde in Germany, among many others. Aragón is the recipient of numerous awards, scholarships and fellowships, some of which include a 2020 NYSC/NYFA Artist Fellowship, an Artist Project Grant from the CUNY Research Foundation, as well as other exhibition prizes and top honor awards.

Aragón has performed Artist Lectures at Universities, Galleries, and other Arts Organizations; in addition, he has presented papers at conferences in Mexico and the USA.

His artwork has been published in numerous catalogs and books some of which include: