Ava Chin is the author of the award-winning Eating Wildly: Foraging for Life, Love, and the Perfect Meal (Simon & Schuster, 2014), which won 1st Prize in the 2015 M.F.K. Fisher Book Awards. Kirkus Reviews called Eating Wildly “A delectable feast of the heart,” and Library Journal named it one of the “Best Books of 2014.” Her writing has appeared in The New York Times (“Urban Forager”), the Washington Post, the Los Angeles Times, the Village Voice, Marie Claire, and Saveur, among others. She has been the recipient of grants and fellowships from the New York Public Library’s Cullman Center for Scholars & Writers, the Fulbright U.S. Scholar Program, the New York Foundation for the Arts (NYFA), the New York Institute for the Humanities at New York University, and the Asian American Writers’ Workshop.

Chin is the editor of the anthology Split: Stories from a Generation Raised on Divorce (McGraw-Hill), about growing up in a divorced family. Her fiction and poetry appear in Dick for a Day, It's Only Rock N Roll, Listen Up! Spoken Word Poetry, and A Gathering of the Tribes. She has been featured on PBS’ Victory Garden, WNYC’s All Things Considered, and KCRW’s Good Food with Evan Kleiman, and performed on stages at Woodstock ‘94, the Whitney Museum, and the Knitting Factory. As a lyricist, she contributed lyrics for the alternative rock band Soul Coughing’s El Oso (Warner Bros.)

Professor Chin holds a PhD from the University of Southern California, a MA from the Writing Seminars at Johns Hopkins University, and a BA from Queens College, CUNY. The Huffington Post named her one of "9 Contemporary Authors You Should Be Reading."

Ph.D. The University of Southern California

Ed., Split: Stories from a Generation Raised on Divorce (McGraw-Hill, 2000)

“Racists Kicked My Chinese Ancestor Out of America. He Still Loved the Railroad He Worked On.” The Washington Post, May 30, 2019. 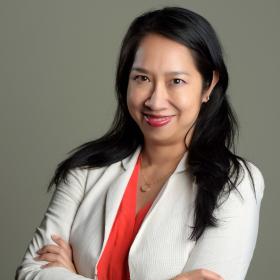