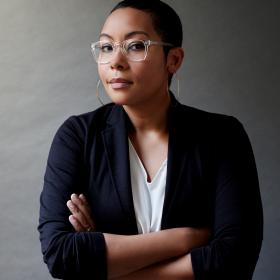 Racquel Gates is an Associate Professor of Cinema and Media Studies at the College of Staten Island, CUNY. Racquel Gates received her Ph.D. in Screen Cultures from Northwestern University and has an M.A. in Humanities from the University of Chicago and a B.S. in Foreign Service from Georgetown University. Her research focuses on blackness and popular culture, with special attention to discourses of taste and quality. She is the author of Double Negative: The Black Image and Popular Culture (Duke, 2018), where she argues that some of the most disreputable representations of black people in popular media can strategically pose questions about blackness, black culture, and American society in ways that more respectable ones cannot. Her work appears in both academic as well as popular publications, some of which include Film Quarterly, Television & New Media, The New York Times, The Los Angeles Review of Books, The Root, as well as other journals and collections.

“The Last Shall be the First: Form, Politics, and Reality Television.” Dimensions in Black: Perspectives on Black Film and Media special issue. Film Quarterly Vol. 71, No. 2 (Winter 2018): 38-45.