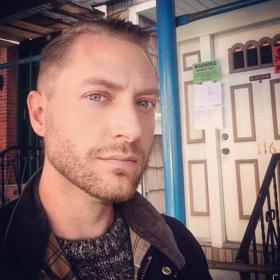 Professor Edgecomb is a hybrid scholar/artist who teaches broadly across theatre and performance studies as well as queer/intersectionality studies at CSI and through his appointment as a faculty member at the the Ph.D. Program in Theatre and Performance at The Graduate Center. He regularly directs faculty productions and also teaches acting and devising. His research focuses on LGBTQ+ theatre and performance history in a global context, queer theory and performance ethnography. He is a former FFPP Diversity Fellow and has been selected for the Dean's Research Award (2015) and several PSC CUNY Fellowships to fund inernational research for travel.  Professor Edgecomb is committed to promoting inclusion, diversity, empathy and representation in the classroom and through scholarly discourse and its dissemination. Sean also creates contemporary queer folk paintings under the psuedonym Peter Kunt as an extension of his scholarly/performance work.The original compositions strive to force a material confrontation betwwen the notion of past and present, disrupting patriarchal concepts of of history as linear, progressive and/or a factual record.

Ph.D. in Drama from Tufts University

M.A. in Theatre Studies and Education from Emerson College

B.A. in Literature from the University of Maine