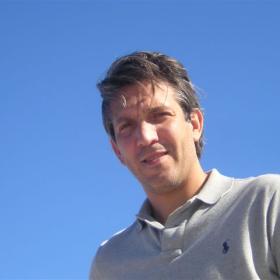 Angelo Bongiorno is an Associate Professor in Chemistry at College of Staten Island – CUNY. Prior to joining CSI in 2015, he earned a B.S. degree in Physics in 1995 from the University of Milan (Italy) with the highest honors (Summa Cum Laude), and a Ph.D. in Physics from the École Polytechnique Fédérale de Lausanne (Switzerland) in 2003. He went to Georgia Tech (Atlanta, GA) as a postdoc in 2003, and at Georgia Tech, he joined the faculty of the School of Chemistry and Biochemistry in 2008, and in 2014 he also joined the faculty of the School of Physics. In 2015, he joined the Chemistry Department at CSI.

S. Zhou and A. Bongiorno, "Origin of the chemical and kinetic stability of graphene oxide," Scientific Reports 3, 2484 (2013)