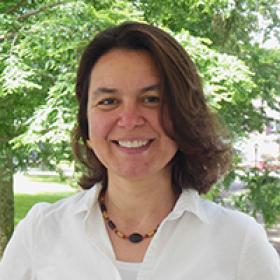 Contact Information
Office : Building 2S Room 201
Phone : 718.982.3659
Fax : 718.982.3643
Contact Via Email
christinatortora.commons.gc.cuny.edu
Christina Tortora is a linguistics professor trained in Syntax. Her research focuses on the syntactic structure of Italian, Italian dialects, the Romance languages, and non-standard varieties of English (such as Appalachian English). She is interested in linguistic description, which is both informed by and informs current syntactic theory. Her interest in description and how grammars are like one another is driven by the desire to construct a theory that can uncover the similarities among languages (so that syntactic phenomena which may at first glance appear to be quite different, can in fact be shown to have the same principles underlying them). In the 1990s, she spent several years doing fieldwork on Borgomanerese, a dialect spoken in the Piedmontese region of Northern Italy (in the town of Borgomanero). She has taught both at the University of Padova (Italy) and the University of Michigan, and has given many invited lectures and talks both nationally and internationally.

Professor Tortora has published various books, articles in linguistics journals, and chapters in books (both in English and Italian) on various topics such as the syntax of Italian dialects, existential constructions, the nature of so-called pleonastic elements in grammar (also known as “expletives”), possessive constructions, prepositions and prepositional syntax, aspect, resultative predication, clause structure, auxiliary selection, and agreement. She currently (2006-2008) has a collaborative grant from the National Science Foundation (NSF), in which she is working with colleagues at the CUNY Graduate Center, Georgetown University, and William Paterson University to study the syntactic structure of Appalachian English. In 2001 she held a National Endowment for the Humanities (NEH) Fellowship to do research for a grammar of Borgomanerese, and in the past has had various NSF grants to support her research and conference organization. In 2006 she was the humanities recipient of the Feliks Gross Endowment Award for Outstanding Scholarly Achievement by a junior faculty member, awarded by the CUNY Academy for the Humanities and Sciences.