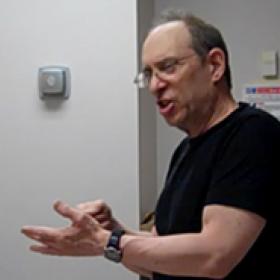 After getting his bachelor’s degree in political science and teaching certification from Boston University, Gene Fellner joined the Attica Brothers Legal Defense, the organization defending the 61 prisoners accused of leading the 1971 Attica Prison uprising. Years later, when the trials were over, he began his career as a fine artist though he continued activist work, going to Nicaragua as a brigadista in the 1980s to support the Nicaraguan Revolution. In 1986, Fellner was named Distinguished Artist of New Jersey by the New Jersey State Council on the Arts. In 2004, Fellner founded Seven Stories Institute (SSI), an organization dedicated to introducing disenfranchised communities to the books that have those communities as their subjects and setting up conversations between community members and the authors of those books. In 2006, Fellner was hired by New Jersey City University to mentor language arts middle school teachers in some of the most underperforming middle schools in Newark where he continues to work. Professor Fellner explores the spaces where art and research meet and collaborates with his students to develop methodologies that illuminate and scaffold their many strengths.

Fellner, G.  (2014). Broadening our lenses of perception to advance learning: An introduction to multilectics, International Journal of Teaching and Teacher Education 37 169-182.