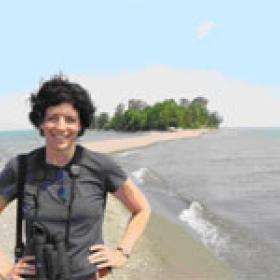 Dr. Manne is an ecologist and a biogeographer, with strong interests in conservation. Why are species located in some places and not others? The answer is related to evolutionary history, environmental tolerances, resource availability, and competitive or predatory interactions with other species, among other things.

Dr. Manne is also interested in how scale affects our inference.

A partial listing of Representative papers include:

(in revision) Tucker, C. M., A. G. Rebelo, and L. L. Manne. Differential contribution of fire, space and climate to distribution and abundance in a fire-adapted system. Ecography. 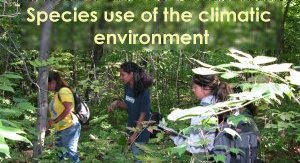 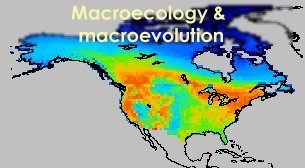 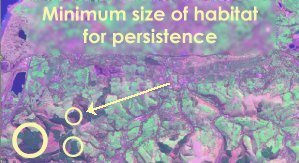 I am an ecologist and a biogeographer, with strong interests in conservation. Why are species located in some places and not others? The answer is related to evolutionary history, environmental tolerances, resource availability, and competitive or predatory interactions with other species, among other things. Particularly, my lab pursues research in 3 main areas:

I am also interested in how scale affects our inference.

Species use of the climatic environment
The problem of predicting abundance is a problem of characterizing a species' ecological niche. Ecological niche can be viewed as the fundamental niche (locations that the species could inhabit, because the climate and habitat are suitable) vs. the realized niche (locations where the species is actually found, these locations being limited by dispersal barriers, interspecific interactions, etc.). When we view species locations in nature, we are seeing them occupy a realized niche. Characterizing the realized niche requires a treatment of climate and resources, but also a treatment of additional factors including intraspecific competition (Maurer and Taper 2002), interspecific competition (Connell 1961, Brown and Munger 1985, Davis et al. 1998a, Davis et al. 1998b, Anderson et al. 2002), predation (Paine 1974), and dispersal barriers or rates (Pulliam 2000, Svenning and Skov 2004), which may severely depress species abundances, or exclude a species from an otherwise suitable area. Incorporating all other potentially interacting species distributions or abundances as predictors of a focal species' distribution or abundance increases the complexity of the exercise enormously. In fact, studies which have assessed the effect of interactions with other species on the focal species' distribution have typically examined either few focal species, few potential competitors, or both (Leathwick and Austin 2001, Anderson et al. 2002, Gutierrez et al. 2005). Additionally, for most species, and in most areas, we do not have comprehensive information on which processes (e.g., predation, competition) may be acting to substantially influence species abundances. In the studies on relationships between abundance and environmental variables in the literature, the introduced slug of Willis et al. (2006) is the only species that is likely to be relatively free of the processes of competition and predation. Other research shows that while not all species abundances can be predicted using environmental variables (Gilman 2006, Kimmel et al. 2006), for at least some species in some areas, and even in the presence of competition, predation, etc., abundances can be predicted with the use of climate variables alone.

My lab has tested this idea for several bird species in the USA. We used climate variables (e.g., mean annual temperature at a site, hottest temperature of warmest month, average monthly precipitation, etc.), an index of available resources (NDVI), and measures of competition and predation pressure to predict bird abundance. For the particular species we studied, we found that both climate and competition information are equally important for predicting abundances across geographic ranges. (Climate alone was not enough, which does imply that climate change projections which do NOT take competition into account are suspect.). I would like to test this result for other species and areas of the world, and at finer scales, and am looking for doctoral students to work with me on this project.

Macroecology and Macroevolution
Adaptation to the environment is in part shaped by genetics, and descent with modification ensures that superior adaptations are passed on. So we expect that similarity in adaptation to climatic variables will correspond to evolutionary similarity. This relationship has been documented for some groups in some parts of the world, but not for large groups at a hemispheric or global scale. Deviations from the relationship where taxa have similar climatic associations but dissimilar geographic distributions point to ecological equivalence. Deviations where taxa have similar climatic associations but are evolutionarily dissimilar represent convergence. Both types of deviation, investigated at a higher taxonomic level and global scale, are necessary for understanding the relative importance of evolutionary constraints and ecological adaptations for understanding geographical distributions. Incorporating phylogenetic information when analyzing global distribution data would be a significant advance for the discipline, and will inform conservation of evolutionary history (Sechrest et al. 2002). It can be argued that the family level is a coarse taxonomic level, and not relevant to any conservation applications (where the primary unit is species). I counter that, if the climatic association portion of Hutchinson’s niche is phylogenetically conserved, this effect is detectable at a high taxonomic level and coarse spatial scale, and will give an indication of the effect of evolutionary history on current distributions. I am looking for a doctoral student to work with me on this project.

Minimum Habitat Size for Species Persistence
What is the threshold fragment size below which a particular species does not persist? I expect that the answer will vary from species to species. a) The answer for a generalist species will be small compared to that for a specialist species (e.g. a warbler that has very particular habitat requirements). There will be some species (pigeons) seemingly unaffected by changes in land cover. b) Likewise, a species’ ability to travel between fragments will impact a fragment’s seeming ability to maintain that species between time periods. Not all birds are able to fly across inhospitable habitats - for example, woodpeckers will not disperse across large bodies of water. Thus, species with higher dispersal ability are more likely to be maintained within smaller habitat fragments, because a local extinction from the fragment is likely to be followed by an immigration to the fragment from somewhere else. c) If particular species are able to disperse between fragments, the inter-fragment distance may limit the possibility of this dispersal. d) It has been suggested that fragmentation has a stronger effect if a species is at the periphery of its global range, so bird species that reach their northern range edge within the study region may require larger forest fragment sizes to ensure persistence. I am looking for a doctoral student to work with me on this project

Lab members
NOTE: I am currently recruiting for students to work on questions of 1) macroecology and macroevolution, and 2) predicting abundance across geographical ranges.

1) Macroecology & macroevolution: I am currently recruiting for a PhD student to work on questions of niche evolution in vertebrates. The student will assess phylogenetic predictors of climatic use and geographic range differences across taxa to address questions of how environmental use evolves. See my research page for more info. Email me with your interest, and note that the deadline for grad student application to the Graduate Center at CUNY is ~ January 1, 2010.

2) Abundance across geographical ranges: I am currently recruiting for a PhD student to work on using different predictors (e.g., climate, resource levels or types, competitive interactions) to reliably predict abundances of species across their geographic ranges. This work is going forward for several taxa in different parts of the world. See my research page for more info. Email me with your interest, and note that the deadline for grad student application to the Graduate Center at CUNY is ~ January 1, 2010.

(in press) Rashvand, A. and L. L. Manne. Loopholes in species conservation laws in Canada at the national and provincial levels Journal of International Wildlife Law and Policy

Williams and Manne. 2007. "Complementarity," in: The Encyclopedia of Biodiversity, 2nd edition.

Manne, Lisa L 2003. Nothing has yet lasted forever: current and threatened levels of biological and cultural diversity. Evolutionary Ecology 5: 517-527.