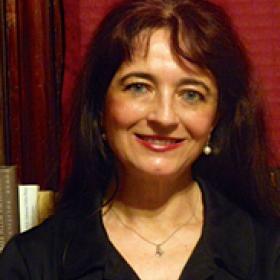 Contact Information
Office : Building 2S Room 105
Phone : 718.982.3708
Fax : 718.982.3712
Contact Via Email
Nuria Morgado received her Ph.D. in Spanish and Latin American Literature from The University of Arizona. She also holds a degree in Journalism from the Universidad Autónoma de Barcelona (Spain). Her research interests include modern and contemporary Spanish literature, cultural studies, comparative literature, and the relationship between literature and philosophy. Since 2003 she has been working in the College of Staten Island. In 2008 she received an appointment in the Hispanic and Luso-Brazilian Literatures and Languages program at The Graduate Center. In Spring 2015 she was inducted into the North American Academy of the Spanish Language (ANLE). She is also part of the Academic Committee of the Miguel Delibes Chair, founded by the Graduate Center (CUNY) and the University of Valladolid (Spain). Professor Morgado is the co -founder of the electronic publication Letras Hispanas: revista de literatura y cultura and the Book Review Editor of the Arizona Journal of Hispanic Cultural Studies. In addition, she is part of the editorial committee for the Boletín de la Academia Norteamericana de la Lengua Española and the journal Siglo XXI: Literatura y Cultura Españolas, among others.

Ph.D., The University of Arizona

M.A., The University of Arizona

Professor Morgado has published numerous essays, chapters in books, interviews and reviews, both nationally and internationally. Her publications have appeared, among others, in such literary journals as Hispania, Anales de la Literatura Contemporánea, Revista Hispánica Moderna, España Contemporánea, Siglo XXI: literatura y cultura españolas, or Culture &amp; History Digital Journal, edited by the Institute of History of the Consejo Superior de Investigaciones Científicas (CSIC). She is the author of the book Voces de mujer (Voices of Women), a critical edition of selected short stories by Spanish writer Lourdes Ortiz. She is the co-editor of Filosofía y culturas hispánicas: nuevas perspectivas, an edited volume of essays on philosophy, literature and Hispanic cultures, forthcoming from Juan de la Cuesta in 2016. Morgado is currently working on a manuscript on Spanish author Antonio Machado and the philosophy of Immanuel Kant in addition to co-editing an anthology of contemporary poets working and living in the metropolitan area of Barcelona (Spain).