Reece Peck's research examines the areas of populist political rhetoric, television news and tabloid media. As a doctoral student, he conducted field research at various Tea Party protests and at Americans for Prosperity activist training conferences. He earned his Ph.D. in Communication from the University of California San Diego, and is the author of Fox Populism: Branding Conservatism as Working Class (Cambridge, 2019). Where existing explanations of Fox’s appeal have stressed the network’s conservative editorial slant, Fox Populism sheds light on the importance of style as a generative mode of ideology. His research on Fox has resulted in invitations to speak at Columbia University, New York University, and at the University of Southern Denmark as the U.S. Embassy’s 2019 Honora Rankine-Galloway Lecture. His book has garnered attention beyond the academy as well attracting television (e.g., WNBC in New York) and podcast interviews (e.g., NowThis News) and interviews with prominent US newspapers such as The Washington Post, Forbes, and The Boston Globe and with international outlets such as Japan’s Asahi Shimbun, France’s AFP, and the United Kingdom’s Daily Telegraph. In addition to publishing articles in academic journals such as Media, Culture & Society (2014) and Journalism (2017) and in edited volumes such as News on the Right (Oxford, 2019) and The Routledge Companion to Media Disinformation and Populism (Routledge, 2021), Peck has written popular pieces for outlets such as TV Guide, Influence and Zócalo Public Square. 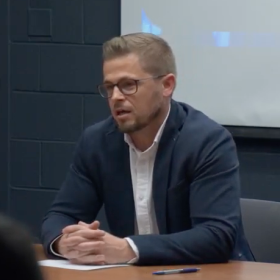