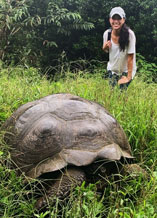 Studying abroad in Ecuador was an incredible experience. I was able to learn about the fauna and flora of the Galápagos Islands not only in a classroom, but also while performing field research and exploring during my free time. The biggest highlight from my trip was getting to snorkel with hammerhead sharks, sea lions, sea turtles, and stingrays. I feel so lucky that I was able to live out every biologist’s dream of traveling to where Charles Darwin developed his theory of evolution by natural selection. 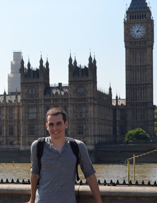 Studying abroad during the summer before my junior year is one of the most memorable experiences of my life. By using the Opportunities Fund provided by Macaulay, I was able to pay for and study abroad for four weeks in London, England. I took a course on Contemporary British Drama, and watched and critiqued a number of plays in a city where literature and theatre have flourished for years. As an English major, there couldn’t have been a better place to study.

My time spent in London exposed me to a vast and exciting city where I was able to see famous sites, such as Big Ben and the River Thames, all while meeting and creating new relationships with fellow students and locals. Having access to the Opportunities Fund as a Macaulay Student granted me the ability to experience a number of possibilities while I was abroad. For starters, I was able to take a weekend trip to Paris, France. While in Paris, I climbed atop the Eiffel Tower, visited Notre Dame Cathedral, toured the Palace of Versailles, and explored the palace’s magnificent grounds. By the end of my study abroad trip in England, I had experienced something that supported my growth as a student and as an individual, while also adding a distinctive aspect to my résumé. 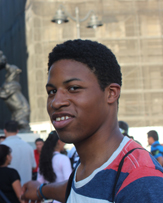 The opportunities fund allowed me study abroad in Santander, Spain for four weeks in the summer. While there, I advanced my Spanish skills in a classroom with five students and four instructors. I also studied Spanish literature and cinema. In addition to my studies, my trip consisted of tapas tours, bullfights, and flamenco dances. By the end, my comfort in the language improved so much that I even performed a rap in Spanish in front of the entire program.

When the fall semester started, I wanted to share my stories and encourage other students to study abroad. Volunteering as a study-abroad peer advisor allows me to do this. It has also given me the opportunity to promote international education in the broader community through high school visits. It's a great feeling you get when you play a part in enriching the life and involvement at your campus community.